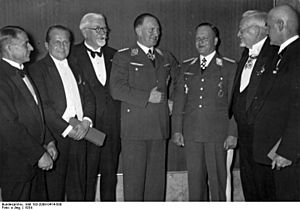 He was awarded various medals, including the Pour le Mérite and the Iron Cross.

All content from Kiddle encyclopedia articles (including the article images and facts) can be freely used under Attribution-ShareAlike license, unless stated otherwise. Cite this article:
Bruno Loerzer Facts for Kids. Kiddle Encyclopedia.