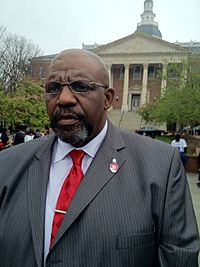 Anthony Wayne "Bubba" Green (September 30, 1957 – June 21, 2019) was an American football player. He played as a defensive lineman. He played one season for the Baltimore Colts in the National Football League (NFL) in 1981. After playing 15 games for the Colts, he injured his knee and never played another NFL game. Green was born in Cape May, New Jersey and grew up in Woodbine.

All content from Kiddle encyclopedia articles (including the article images and facts) can be freely used under Attribution-ShareAlike license, unless stated otherwise. Cite this article:
Bubba Green Facts for Kids. Kiddle Encyclopedia.