Buda is an unincorporated community in Buffalo County, Nebraska, United States. It is part of the Kearney, Nebraska Micropolitan Statistical Area. 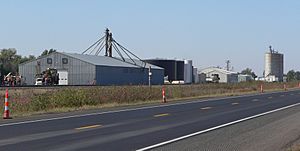 Buda lies at an elevation of 2,116 feet (645 m). It is located four miles east of Kearney and eight miles west of Gibbon.

Buda was founded in 1886 when the railroad was extended to that point. It was likely named after Buda, now a part of Budapest, in Hungary.

All content from Kiddle encyclopedia articles (including the article images and facts) can be freely used under Attribution-ShareAlike license, unless stated otherwise. Cite this article:
Buda, Nebraska Facts for Kids. Kiddle Encyclopedia.