The Budj Bim National Park, formerly known as Mount Eccles National Park, is a national park located in the Western District of Victoria, Australia. The 5,470-hectare (13,500-acre) national park is situated approximately 270 kilometres (170 mi) west of Melbourne and approximately 15 kilometres (9.3 mi) southwest of Macarthur. It derives its name from Budj Bim, formerly Mount Eccles, which is situated in the north-east of the park.

The park now forms part of the larger Budj Bim heritage areas of both national and world significance, due to the extensive systems of aquaculture created by Aboriginal Australians thousands of years ago and the significance of the area to the Gunditjmara people. 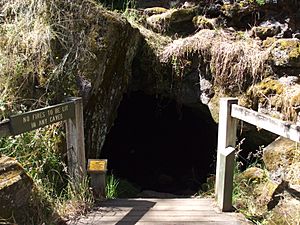 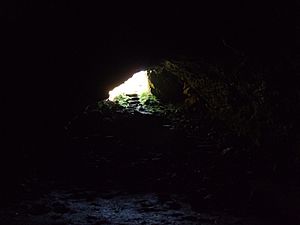 Located within the national park is Budj Bim, formerly named Mount Eccles by the European people who settled in the area, is the site of one of the most recent active volcanos in Australia. The first activity was about 40,000 years ago when Budj Bim was formed by lava pouring out the Earth's crust. The most recent eruption was approximately 8,000 years ago. Budj Bim is a fairly small hill surrounded by lush vegetation with a small, hidden, deep volcanic crater lake named Lake Surprise. It is famous for an adjacent lava tube and there are numerous lava tubes in the surrounding farm land.

As one of three components of the Budj Bim Cultural Landscape, it was added to the UNESCO World Heritage List on 6 July 2019.

As of 2020[update] Budj Bim National Park, as part of the Budj Bim National Heritage Landscape, is jointly managed by Parks Victoria, the (Gunditjmara) Gunditj Mirring Traditional Owners Aboriginal Corporation (GMTOAC) and Winda-Mara TOAC (a south-west Victorian organisation representing Indigenous Australians in the area). The Council forms part of the 2007 Native Title Settlement Agreement between the Gunditjmara and the Victorian Government, under which both parties manage the park landscape.

During the 2019-2020 Australian bushfire season, fires broke out within the Budj Bim Cultural Heritage Landscape. The stone fish traps and the stone house site were unaffected by fire, and fortunately the fires were quickly contained, partly due to mild weather conditions and partly by the efforts of firefighters. Lake Condah and Condah Mission were not directly affected by the fires. In the National Park, the campground and picnic area reopened from 29 February 2020, but the Lake Surprise walking track and access to Tunnel Cave were closed due to the impact of the fires. As of 19 March  2020 (2020 -03-19)[update], the Crater Rim Walk and Lava Canal Walk are open, but re-routed near Tunnel Cave.

All content from Kiddle encyclopedia articles (including the article images and facts) can be freely used under Attribution-ShareAlike license, unless stated otherwise. Cite this article:
Budj Bim National Park Facts for Kids. Kiddle Encyclopedia.