The hill on which the park lies is composed primarily of sand and San Francisco chert, formed in the Mesozoic era. The layout of the park uses the steepness of the hill to good advantage, offering good views of the city (particularly to the north). 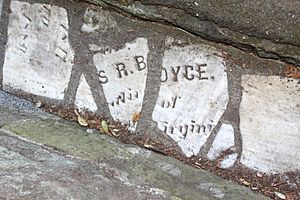 At the peak of the park is a small lawn. Notable views are available from various lookouts lower down, including "The Window," an overlook on the western side of the hill from which there is a sweeping vista of Golden Gate Park, the Pacific Ocean, and, on clear days, northward up the coast to the white cliffs of Drake's Bay.

The paths along the west side are lined with gutters built by WPA workers out of broken headstones from the City's Victorian cemeteries at Lone Mountain (i.e. Laurel Heights), which were moved to Colma in the 1930s. In a few cases the inscriptions were placed facing up and can be discerned (Cf. the Wave Organ).

The northeast corner staircase features a large peace symbol (the classic Campaign for Nuclear Disarmament variety) shaped out of flower plantings. Further south a tennis court is located just inside the park at the intersection of Duboce and Buena Vista East streets.

Across the street from the south side of the park is 355 Buena Vista East, an architecturally notable building which appears briefly in Alfred Hitchcock's Vertigo. The building, constructed in 1928 as St. Joseph's Hospital, has been converted to condominiums. The building is on the National Register of Historic Places.

611 Buena Vista West, on the west side of the park near Frederick Street, was a particularly noteworthy example of the modern-architecture work of Cass Calder Smith, as featured in many architectural magazines including Dwell (Jan/Feb 2005). This modern house was significantly modified with an addition of another level in 2015.

The N Judah runs underneath the park via the Sunset Tunnel.

All content from Kiddle encyclopedia articles (including the article images and facts) can be freely used under Attribution-ShareAlike license, unless stated otherwise. Cite this article:
Buena Vista Park Facts for Kids. Kiddle Encyclopedia.