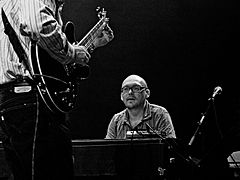 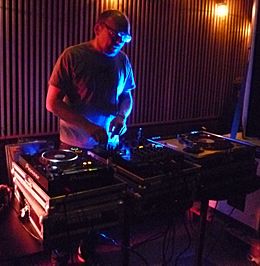 DJ Bugge at the 2016 Nattjazz
in Bergen, Norway.

Wesseltoft was born in Porsgrunn. After high school in Skien, where he was involved in the school brass band and dance orchestras, he became a professional musician in 1983 only 19 years old. By the age of 16, he joined a punk rock band, but the influence of the jazz guitarist father, stalked on him. After moving to his father in Oslo (1984), it was mostly music with roots in jazz that mattered, although he also worked as a back-up musician and producer for the pop and rock elite in Norway. He had originally intended to study music, but the gigs were too many, and therefore he never got any further formal musical education. Towards the end of the 1980s Bugge Wesseltoft was involved in a variety of pop, rock and jazz bands like the "U and Z", "Et Cetera" and most important the Oslo Groove Company, and he was recognised as a coming musical genius with a great talent for the piano. This led to collaborations within the Knut Riisnæs Quartet in 1989, and he was soon after contacted by Arild Andersen to join in on the commissioned work for Vossajazz - released on the album Sagn (1990) - and the follow up Arv (1993), and Jan Garbarek for his Molde Canticle (1990), a commission from the Moldejazz, released on the album I Took Up the Runes (1990).

Bugge Wesseltoft had a great impact on the Norwegian Jazz scene at the beginning of the 1990s, while going through a transition from Nordic jazz traditions exemplified by the ECM label to a style sometimes referred to as "future jazz" or nu jazz. There after he toured extensively on the international Jazz scenes, performing both jazz and rock concerts to live audiences, and on a series of recordings on his own Jazzland label. Bugge Wesseltoft collaborated with a series artists in this period, like the guitarists Terje Rypdal and Jon Eberson, and in the mid-1990s he toured and recorded the album Billy Cobham presents Nordic – Off Color (1999) together with Billy Cobham. For many years he collaborated with the experimental jazz vocalist Sidsel Endresen, and was in the lineup for her commissioned work at the Moldejazz in 1993, which was released on the album Exile (1994). His own commissioned work A Little War Story for the Vossajazz was also performed in 1993. Bugge Wesseltoft formed his own band the 'New Conception of Jazz' in 1995, and their first album New Conception of Jazz (1996), was awarded a Spellemannprisen in 1996.

During the 1990s the music of Bugge Wesseltoft found an audience on the Norwegian techno and dance music scenes. The connection with the club world led to the 2000 release of Jazzland Remixed, which enhanced his reputation even more with the younger audience. Firmly committed to electronic music, he completely eschews acoustic forms and is just as adamant that he will not be tied by genre boundaries, bringing hip-hop and other contemporary dance music forms into his concept of contemporary jazz. On the album Sharing (1998) many were taken by surprise by his extensive use of club DJ's and scratchers.

After Wesseltoft liked working with Dan Berglund (on "Trialogue"), he decided to found a jazz trio with him. As a drummer he asked Magnus Öström. The band Rymden had their first appearance at the Nattjazz Festival in Bergen in 2017. According to Wesseltoft, the band began work on a debut album after this successful performance. Wesseltoft had the band signed on his Jazzland label. Further appearances followed in 2017 and 2018, and in 2019 Rymden recorded their first album, Reflections & Odysseys’'.

John Kellman of the All About Jazz magazine recognized Bugge Wesseltoft Solo appearance at The Punkt Festival, Kristiansand, Norway, September 2013, as one of his 25 "Best Live Shows of 2013".

All content from Kiddle encyclopedia articles (including the article images and facts) can be freely used under Attribution-ShareAlike license, unless stated otherwise. Cite this article:
Bugge Wesseltoft Facts for Kids. Kiddle Encyclopedia.