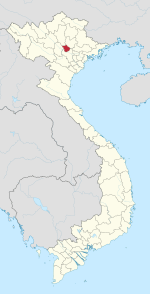 Bui Thi Minh Hang (Vietnamese Bùi Thị Minh Hằng) is a Vietnamese activist and blogger. In 2016, Samantha Power, the U.S. Ambassador to the U.N., named her one of twenty women political prisoners in the Free the 20 campaign. Bui Thi Minh Hang was released Feb. 11, 2017.

In 2011, Bui Thi Minh Hang protested in Hanoi and in Ho Chi Minh City. She protested against Chinese land claims on the Spratly and Paracel Islands. Police arrested her and sent her to sent her to Thanh Ha Education Center, a reeducation camp in Vinh Phuc province. There was an international protest about her arrest. She was in the reeducation camp for six months without a trial.

In 2012, Bui Thi Minh Hang was free again, and started to work for human rights again. She wrote about her time in the Thanh Ha Education center. She also gave people a “Manual for the Implementation of Human Rights” (Cam nang thuc thi quyen lam nguoi). In 2014, Bui Thi Minh Hang and a group of 21 bloggers and Hoa Hao Buddhist activists went to visit a political prisoner. The police arrested Bui Thi Minh Hang and two others. She was charged with disrupting traffic under Article 245 of the Penal Code. She was sentenced to three years in prison.

In 2016, Amnesty International said Bui Thi Minh Hang had health problems in prison, but she did not get medical care.

Bui Thi Minh Hang was released on Saturday Feb. 11, 2017. Her family and supporters were with her, and the traffic police escorted her back to Ho Chi Minh City.

All content from Kiddle encyclopedia articles (including the article images and facts) can be freely used under Attribution-ShareAlike license, unless stated otherwise. Cite this article:
Bui Thi Minh Hang Facts for Kids. Kiddle Encyclopedia.