A building model is either a physical (real) or virtual (computer) model of a building. Very often, the physical model is smaller than the original (scale model). 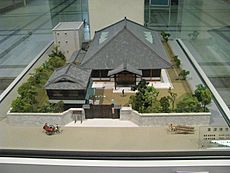 There are three basic types of building models: architectural, structural and mathematical (virtual).

An architectural model is a type of a physical model of a structure to study an architectural design or to share design ideas to clients, committees, and the general public. Architectural models are a tool which may be used for show, presentation, fundraising, getting permits, and sale purposes. Such models are a good tool for three-dimensional understanding of a design, used by architects, interior designers and exhibit designers.

Engineers who need scale models to test the likely performance of a design at an early stage of development without paying for a full-sized prototype. 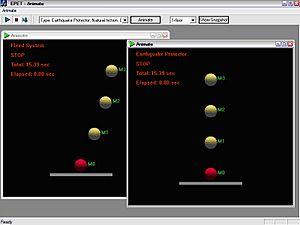 Computer animation of two concurrent building models with the help of EPET,.

Virtual model is a digital model of the object (typically greatly simplified) that can be used in a computer simulation or virtual reality.

The most common examples of virtual models are those created in 3D for the purpose of visualisation - seeing how the structure looks before it is built. The field of architecture has greatly popularized the use of virtual models to animate fly-throughs of yet-to-be-built buildings.

All content from Kiddle encyclopedia articles (including the article images and facts) can be freely used under Attribution-ShareAlike license, unless stated otherwise. Cite this article:
Building model Facts for Kids. Kiddle Encyclopedia.