Bulbine bulbosa, commonly known as bulbine lily, is a flowering plant in the genus Bulbine. It is endemic to Australia.

Though other common names include golden lily, leek lily, wild onion, yellow onion weed, and native leek, it is not a member of the Liliaceae, the lilies, or the Alliaceae, the onions and leeks.

B. bulbosa often grows in dense colonies. It reaches up to 75 centimeters tall. It has succulent, greyish green, narrowly lanceolate leaves. The fragrant, star-shaped yellow flowers are borne on long vertical flowering stalks with the oldest flowers at the base. Each flower has six tepals with tufted, hairy, yellow sepals. Each individual flower only lasts for one day, but the flowering head may bloom for some weeks.

The flowering period is generally long, extending from September to March, but there is wide local variation. Despite its name, the plant forms a round corm, not a bulb, to overwinter.

B. bulbosa occurs in a wide range of habitats and is cytologically variable. The taxon may be a complex of up to four distinct species. The diploid chromosome count is usually 24 (2n = 24), but some populations occur have 2n = 48 or 2n = 72. Shorter, more robust plants that grow on rocky ledges have been referred to as the "rock lily"; this morph has a chromosome count of 2n = 46, suggesting that it may be a separate species.

B. bulbosa has been referred to in texts by a number of alternative names depending on the classification system used at the time of publication. These synonyms include Anthericum bulbosum, Phalangium bulbosum, and Blephanthera depressa. 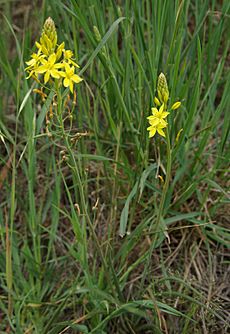 B.bulbosa is an endemic of Australia and is restricted to the eastern half the country, including Queensland, New South Wales, Victoria, eastern South Australia, and Tasmania.

It is relatively widely distributed and native to a variety of habitats, including dry sclerophyll forest, meadows, rocky crags and hedge-banks. It is common in areas with winter rainfall and inundated land such as swamps and bogs.

The corms of mature plants are nutritious, containing calcium and iron, and were used as food by Aboriginal people, who called it parm, puewan, and pike. They regarded the corms as the sweetest-tasting of the lily and lily-like Australian plants.

The plant is said to cause scouring if eaten by sheep or cattle.

The long-lasting stalks of fragrant, attractive yellow flowers and its moderate frost-hardiness have encouraged its use as a garden flower in suitable areas. Few garden varieties have been developed, however. The plant can be propagated from seeds or by division of the corm. Seeds are released from the ripened seed capsules and are best kept at least a month or two before use. They should be sown in the spring, and germination takes about 35 days. Watering and good drainage are essential.

The species suppresses self-fertilization, so collecting seeds from garden-grown plants may result in low germination. Planting seeds from multiple sources may increase yield.

B. bulbosa may be planted in wild areas, but some grasses may inhibit recruitment of new plants from seedlings.

All content from Kiddle encyclopedia articles (including the article images and facts) can be freely used under Attribution-ShareAlike license, unless stated otherwise. Cite this article:
Bulbine bulbosa Facts for Kids. Kiddle Encyclopedia.