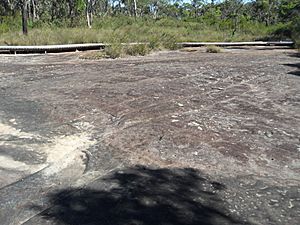 Bulgandry is a village community in the central part of the Riverina. It is situated by road, about 6 kilometres north west from Rand and 12 kilometres south east from Walbundrie.

The place name Bulgandry is derived from the local Aboriginal word meaning "boomerang in hand".

At 11pm, on Saturday 8 February 1919, Bulgandra Hotel licensee Mrs. Mary Josephine Devlin, was shot in the right arm with a shot gun by a man at the hotel, shattering her arm. She was brought to Albury early on Sunday morning and her arm required amputation, but she dies at 1pm. Mary was shot but Patrick Lawrence Gleeson, who had been living at the hotel and had developed a relationship with Mary. Patrick was tried and sentenced to 15 years in Goulburn Gaol.

All content from Kiddle encyclopedia articles (including the article images and facts) can be freely used under Attribution-ShareAlike license, unless stated otherwise. Cite this article:
Bulgandry, New South Wales Facts for Kids. Kiddle Encyclopedia.