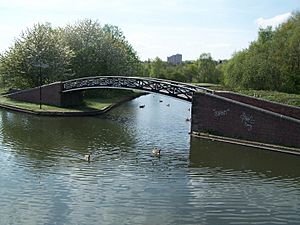 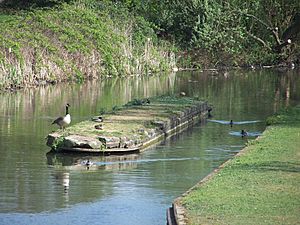 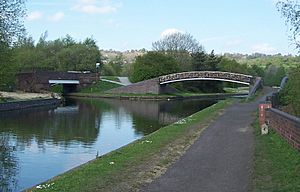 Dunn's Bridge over the junction of Bumble Hole Branch Canal on the left with Bumble Hole Bridge on the right. The bridges were constructed in 1858 and were cast at the Toll End Works in Tipton.

Between Windmill End Junction and the tunnel portal stands Cobb's Engine House, built in 1831 to pump water from coal mines into the canal.

The Bumble Hole railway used to cross the canal near Windmill End Junction, but was dismantled in 1969.

All content from Kiddle encyclopedia articles (including the article images and facts) can be freely used under Attribution-ShareAlike license, unless stated otherwise. Cite this article:
Bumble Hole Branch Canal Facts for Kids. Kiddle Encyclopedia.