Bunnaloo is a village community in the central southern part of the Riverina and situated about 37 kilometres (23 mi) west from Mathoura and 45 kilometres (28 mi) south west of Deniliquin. In 2006, Bunnaloo had a population of 126.

The area that is now known as Bunnaloo originally was split between two properties: the Cobram Station and Perricoota. In 1899, a crown lease on part of the Perricoota land expired and the New South Wales Government split a paddock into six 700 acre homestead farms to be sold in 1901. Further subdividing of the Cobram Estate land allowed for more residents to move to the area.

The first Post Office in Bunnaloo was run from the home of a Mrs Hawkins, replacing the weekly mail run from Mathoura by Syd Larcombe. In 1924 a new railway line was laid, with Bunnaloo homing a new station. This allowed for easy transport of wheat or stock (previously it had to be carted 18 miles to Mathoura).

In 1926, Victor Hicks built a store in Bunnaloo. The Post Office was moved here, becoming the first official Bunnaloo Post Office (until its closure in 1974). 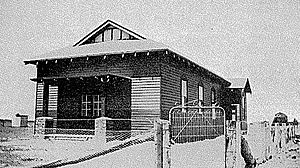 The first Bunnaloo Hall, built in 1927

A petrol station still operates, currently known as Riverine Petroleum. It resides on the intersection of Fitzroy Street and Bunnaloo Road.

All content from Kiddle encyclopedia articles (including the article images and facts) can be freely used under Attribution-ShareAlike license, unless stated otherwise. Cite this article:
Bunnaloo, New South Wales Facts for Kids. Kiddle Encyclopedia.