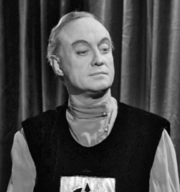 John Cabell "Bunny" Breckinridge (August 6, 1903 – November 5, 1996) was an American movie, television actor, and drag queen. He was best known for his role as The Ruler in Ed Wood's movie Plan 9 from Outer Space. That was the only movie role in his career.

He was born in Paris, France to an American family. Breckinridge was gay and talked about having a sex change operation but never had it. He died on November 5, 1996 in San Francisco, California from natural causes, aged 93. In the 1994 movie Ed Wood he was played by Bill Murray.

All content from Kiddle encyclopedia articles (including the article images and facts) can be freely used under Attribution-ShareAlike license, unless stated otherwise. Cite this article:
Bunny Breckinridge Facts for Kids. Kiddle Encyclopedia.