Buraja is a town community in the central south part of the Riverina. It is about 92 kilometres (57 mi) east of Berrigan on the Riverina Highway.

The Aboriginal name Buraja means ‘a swamp with young trees growing.’ When people settled in the Buraja district in the 1860s there were two parishes – Lowes and Buraja. The name Lowes (Lowesdale) was taken from one of the owners of ‘Buraja Station,’ a local farm.

The small town of Burrajaa or Burryjaa or Burryja, was spelt in a variety of ways in various newspapers between 1900 and 1950, with the most recent spelling of the town being settled as - "Buraja". 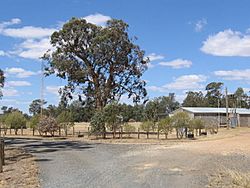 All content from Kiddle encyclopedia articles (including the article images and facts) can be freely used under Attribution-ShareAlike license, unless stated otherwise. Cite this article:
Buraja, New South Wales Facts for Kids. Kiddle Encyclopedia.