According to the Federal Writers' Project, the origin of the name Burdock is obscure.

At this location is the intersection of Fall River County Highway 6463 (Dewey Road) and Township Road B (Argentine Road and Burdock Road). A BNSF Railway line parallels the county highway. In the county's square mile designation, Burdock is closest to 103rd Avenue and 273rd Street. Burdock's nearest neighbors are Dewey to the northwest and Edgemont to the southeast. The border with the state of Wyoming is three miles west, and the Black Hills National Forest extends around the site some three miles to the north, east, and south. The ghost town lies just to the southwest of the Elk Mountains, a small range that is part of the Black Hills. Burdock appears on the South Dakota highway map and Black Hills National Forest map. 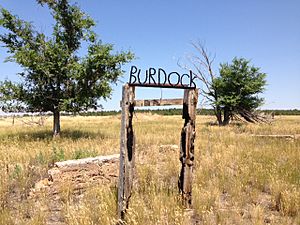 All content from Kiddle encyclopedia articles (including the article images and facts) can be freely used under Attribution-ShareAlike license, unless stated otherwise. Cite this article:
Burdock, South Dakota Facts for Kids. Kiddle Encyclopedia.