The Burton Memorial Tower is a clock tower located on Central Campus at the University of Michigan in Ann Arbor at 230 North Ingalls Street. Housing a grand carillon, the tower was built in 1936 as a memorial for University President Marion Leroy Burton (presidency: 1920–1925). This carillon is the world's fourth-heaviest, containing 53 bells and weighing a total of 43 tons.

The monument was constructed in 1935 and finished in 1936. It stands at 192 feet, with the floor of the bell chamber at 120 feet from the ground. It is located at the University of Michigan campus, and is used for housing education offices. The high-rise tower was designed in an interesting mixture of Art Deco and art moderne architectural styles, constructed with a reinforced concrete shell faced with limestone over a plan 42 feet (13 m) square. The design was greatly influenced by Eliel Saarinen, who had submitted an earlier scheme. At the top is the 43-ton, 53-bell Baird Carillon. The tower chimes the Westminster Quarters every quarter hour in the key of E-flat.

The Burton Memorial Tower was designed by Albert Kahn, who also designed the William L. Clements Library, Angell Hall, and Hill Auditorium for the University of Michigan. Its carillon was donated by Michigan alumnus Charles A. Baird, a lawyer and the first U-M athletic director, and has been christened the "Charles Baird Carillon". Baird had the bells cast in England and gave them to the university. He also commissioned “Sunday Morning in Deep Waters”, the fountain on Ingalls Mall between Burton Tower and the Michigan League.

The University of Michigan campus has two of only twenty-three grand carillons in the world, barely two miles apart. The other is housed at the Ann and Robert H. Lurie Tower on the North Campus. 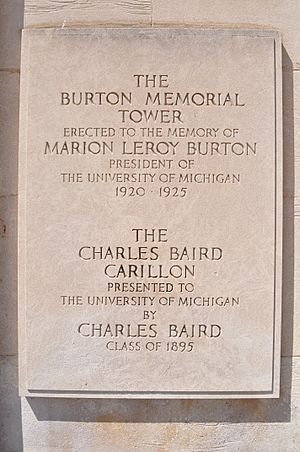 All content from Kiddle encyclopedia articles (including the article images and facts) can be freely used under Attribution-ShareAlike license, unless stated otherwise. Cite this article:
Burton Memorial Tower Facts for Kids. Kiddle Encyclopedia.