The family Tettigoniidae, known in American English as katydids and in British English as bush-crickets, contains more than 6,400 species. It is part of the suborder Ensifera.

They are also known as long-horned grasshoppers, though they are more closely related to crickets than to grasshoppers. Their antennae may be longer than their own body length, those of the grasshoppers are always relatively short.

Katydids may disguise themselves brilliantly. Some look exactly like dead brown leaves, complete with holes, lying still on the forest floor of the rainforests of Asia and South America. Others act like green, living leaves fluttering from a branch. They even have vein-like markings like real leaves. 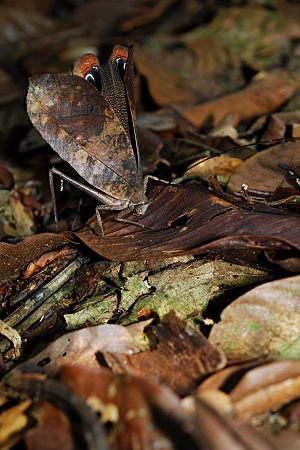 Very interesting visual defences: upper wings fold together at rest, with a dried-leaf pattern. Under wings carry a bright colour which flashes when they fly. A startle device which gains time for escape. See Animal colour#Startle and dazzle defences 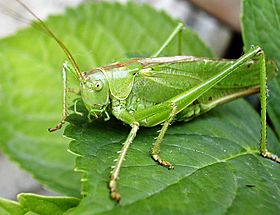 A green bush cricket sitting on a leaf 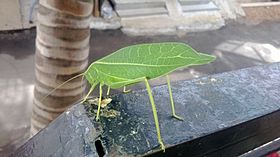 All content from Kiddle encyclopedia articles (including the article images and facts) can be freely used under Attribution-ShareAlike license, unless stated otherwise. Cite this article:
Tettigoniidae Facts for Kids. Kiddle Encyclopedia.