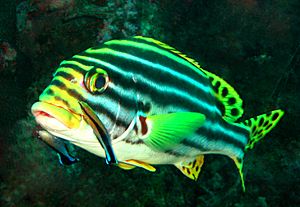 A brilliantly-coloured oriental sweetlips fish (Plectorhinchus vittatus) waits while two boldly-patterned Cleaner fish pick parasites from its skin. The spotted tail and fin pattern of the Sweetlips signals sexual maturity; the behaviour and pattern of the Cleaner fish signal their availability for cleaning service, rather than as prey 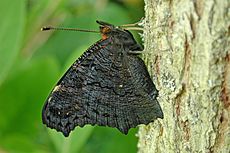 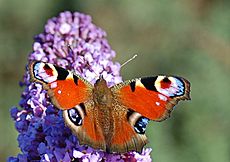 Peacock butterfly displays startling eye-spots when its wings are open; they also distract attacks away from the body. This insect has survived a bird's attack on the eyespot on the right hindwing 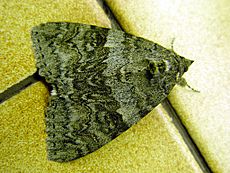 Red underwing moth is cryptic and disruptively patterned at rest 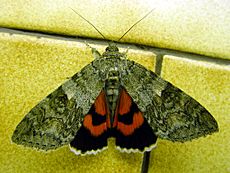 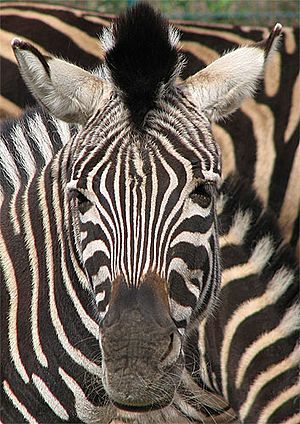 Animal colour (or coloration) is produced by light reflecting from an animal's surface. The ways animals produce colours include pigments, chromatophores and other structures, and bioluminescence.

Since sight is usually so important to animals, and is so often used by predators as a long-range way to find prey, an animal's colour must serve one or more functions. These functions, such as finding prey, or evading capture, or finding a mate, are absolutely essential for life and survival. Therefore, animal colour is determined by natural selection because it affects the survival of animals and their offspring.

Some of the most obvious functions of colour are:

Overwhelmingly, the most common function of colour is in predator-prey relationships. "Anti-predator adaptations occur in every biome of the world and in almost every taxonomic group".

Animal colour has been a topic of interest and research in biology for a long time. According to Charles Darwin's 1859 theory of natural selection, features such as colouration evolved by providing individual animals with a reproductive advantage. For example, individuals with slightly better camouflage than others of the same species would, on average, leave more offspring.

Animals can have a camouflage defence at distance, but when faced by a predator they may switch to a 'flash' defence to gain time and distract the predator. The predator often blinks or turns its face away in self-defence. This is a reflex act which is there to protect its vital facial area. In the second the predator blinks, the prey flies or jumps, and lands in camouflage again. This pattern of colour plus behaviour is quite common. It is called deimatic defence by textbooks, from the Greek for 'dread' or 'to frighten'.

All content from Kiddle encyclopedia articles (including the article images and facts) can be freely used under Attribution-ShareAlike license, unless stated otherwise. Cite this article:
Animal colour Facts for Kids. Kiddle Encyclopedia.