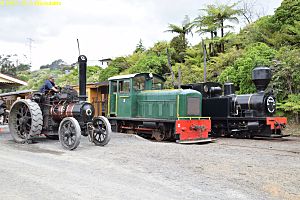 The Bush Tramway Club is a heritage railway 12 km (7.5 mi) west of Huntly along the Rotowaro Road, in the Waikato region of New Zealand. It regularly operates restored locomotives along a 5.4 km (3.4 mi) Rotowaro-Glen Afton section of the former Glen Afton Branch. Open days are the first Sunday of each month.

The Bush Tramway Club was founded in 1965 to preserve equipment from New Zealand's former bush tramways and light industrial lines, railway lines which were used to remove timber from the bush and transport coal from mines to dairy factories. It obtained use of the Rotowaro-Glen Afton section in 1974 and has since purchased most of the rail corridor land. The Glen Afton Branch Line, a former New Zealand Railways branch line to the Pukemiro coal mine was opened in 1915 and closed in 1973.

The locomotives include geared Climax and Heisler locomotives (formerly used on the Ellis and Burnand Tramway, Ongarue), a F class No. F 185 of the New Zealand Railways Department, several diesel shunting locomotives used by the NZR and industrial lines, and some "jiggers".

All content from Kiddle encyclopedia articles (including the article images and facts) can be freely used under Attribution-ShareAlike license, unless stated otherwise. Cite this article:
Bush Tramway Club Facts for Kids. Kiddle Encyclopedia.