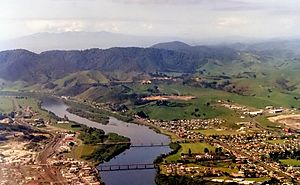 The south end of Huntly, showing parts of the open-pit mining typical of the area

Huntly was called Rahui Pokeka when migrants settled the town some time in the 1850s. The Huntly name was adopted in the 1870s when the postmaster named it after Huntly, Aberdeenshire in Scotland. He used an old 'Huntley Lodge' stamp to stamp mail from the early European settlement. The 'Lodge' was later dropped and the spelling changed to also drop the additional 'e'.

Huntly and its surrounding area is steeped in Māori history and falls within the rohe (tribal area) of Waikato-Tainui of the Tainui waka confederation. Ngati Mahuta and Ngati Whawhakia are the subtribes in the Huntly area. There are a number of marae in and around Huntly: Waahi Pa, Te Kauri, Kaitimutimu, Te Ohaaki and further north, Maurea and Horahora. Waahi Pa was the home of the late Māori Queen Dame Te Atairangikaahu and is still the home of her son, the Māori King Tuheitia Paki.

Huntly is home to Rakaumanga Kura which became one of the first bilingual schools (Māori/English) in New Zealand in 1984. Rakaumanga became a kura kaupapa (total immersion, Māori as its first language) in 1994 and is now known by the name Te Whare Kura o Rakaumangamanga. The school was first established as a native school in 1896.

All content from Kiddle encyclopedia articles (including the article images and facts) can be freely used under Attribution-ShareAlike license, unless stated otherwise. Cite this article:
Huntly, New Zealand Facts for Kids. Kiddle Encyclopedia.