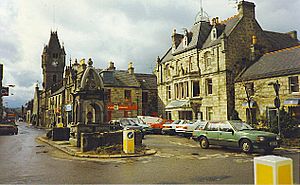 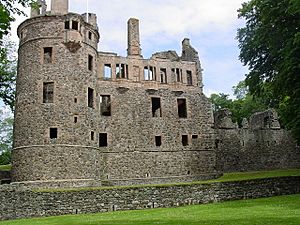 Huntly (Scottish Gaelic: Srath Bhalgaidh or Hunndaidh) is a town in Aberdeenshire, Scotland, formerly known as Milton of Strathbogie or simply Strathbogie. It had a population of 4,460 in 2004 and is the site of Huntly Castle. Its neighbouring settlements include Keith and Rothiemay. Both Huntly and the surrounding district of Gordon are named for a town and family that originated in the Border country.

Huntly is the historic home of the Gordon Highlanders regiment which traditionally recruited throughout the North-East of Scotland. Huntly has a primary school (Gordon Primary) and a secondary school (The Gordon Schools) beside Huntly Castle. There is an active cultural centre called Deveron Arts.

It is the home of the Deans bakers, which produce shortbread biscuits. In November 2007, Deans of Huntly opened their new visitor centre.

There is also a falconry centre just outside the town which does flying displays in their visitor centre during the season between April and October.

All content from Kiddle encyclopedia articles (including the article images and facts) can be freely used under Attribution-ShareAlike license, unless stated otherwise. Cite this article:
Huntly Facts for Kids. Kiddle Encyclopedia.