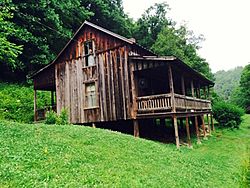 The childhood home of Loretta Lynn and Crystal Gayle, June 2014.

Butcher Hollow (also known as Butcher Holler) is a coal-mining community located in Johnson County, Kentucky, United States. Its claim to fame is being the birthplace of country music legend Loretta Lynn, who paid tribute to the community in the song "Coal Miner's Daughter", which begins with the lyrics

Well, I was born'd a coal miner's daughter

In a cabin on a hill in Butcher Holler

Later in the song, she also mentions Van Lear, the larger community in which Butcher Hollow is located:

My daddy worked all night in the Van Lear coal mines.

All day long in the fields a-hoein corn

as well as on a recent album, Van Lear Rose.

Butcher Hollow took the name of a nearby valley which was named for the local Butcher family. Butcher Hollow is a part of the community of Van Lear, which was constructed by the Consolidation Coal Company in the early part of the 20th century. Van Lear was named for Van Lear Black, one of the company's directors. Although most of Butcher Hollow lies outside of the old Van Lear city limits, the mailing address of those who have lived there has been Van Lear since the establishment of the Van Lear post office in 1909. Butcher Hollow is not an independent town or village in its own right. Currently, Van Lear is an unincorporated community. There are no deep mines operating in Van Lear proper, although some mines operate nearby. Most of the residents work in locations outside Van Lear, including the nearby cities of Paintsville, Prestonsburg, and Pikeville. Since the end of local mining, only a handful of businesses continue to operate in the Van Lear area, including a bookstore, Mine Number 5 Store, The East Kentucky Museum of Mysteries, and Icky's 1950's Snack Shop (located inside the Coal Miners' Museum).

Hundreds of tourists visit the town of Van Lear each year to see the childhood home of Loretta Lynn, Crystal Gayle, and her siblings. Herman Webb, one of Lynn's brothers, gives tours of the house for a fee of five dollars. However, when he is unable to give tours, another person that is closely related to Loretta Lynn and Crystal Gayle will give the tour. The fee from this person is also a fee of five dollars.

Although Butcher Hollow is often listed as a separate town, it is clear those listing it this way do not understand that a hollow in an Eastern Kentucky community would be referred to as a street or avenue if it were located in a city. Thus, Butcher Hollow's address would be Butcher Hollow, Van Lear, Johnson County, Kentucky.

Some storytellers will say that a holler is an area where you have to holler to communicate with your nearest neighbor, meaning how deep in the country you are. In actuality, it simply means an area that nature has hollowed out. Regional dialect changed "hollow" to "holler." A hollow is the depressed area between hills and it usually contains a creek, at least one that runs intermittently. In the hills of Kentucky, most of the fertile, tillable property is adjacent to the creeks that run down the hollow. When people settled the region, they pulled their wagons back into the hollow along the creek and built a cabin high enough on the hill not to be flooded during seasonal high rainfall events. The roads were dirt, and/or the dry creek bed during periods of low water. The saying, "We will be there come hell, or high water," is related to the road being a part of and/or crossing the creek in a holler.

All content from Kiddle encyclopedia articles (including the article images and facts) can be freely used under Attribution-ShareAlike license, unless stated otherwise. Cite this article:
Butcher Hollow, Kentucky Facts for Kids. Kiddle Encyclopedia.