Butteville is a census-designated place and unincorporated community in Marion County, Oregon, United States. For statistical purposes, the United States Census Bureau has defined Butteville as a census-designated place (CDP). The census definition of the area may not precisely correspond to local understanding of the area with the same name. As of the 2010 census the population was 265. It is part of the Salem Metropolitan Statistical Area.

Butteville was founded in the 1840s by members of the Methodist Mission. Butteville was once served by steamboats running on the Willamette River. Butteville saw the peak of its economy in the 1850s, as it competed with neighboring Champoeg, Oregon for shipping business from the surrounding French Prairie. Most of Butteville's early residents were French-Canadian.

There were 106 households out of which 33% had children under the age of 18 living with them, 74.5% were married couples living together, 4.7% had a female householder with no husband present, and 20.8% were non-families. 17.9% of all households were made up of individuals and 9.4% had someone living alone who was 65 years of age or older. The average household size was 2.76 and the average family size was 3.18. 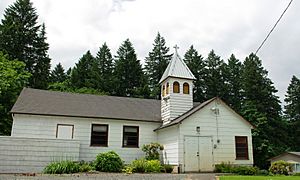 All content from Kiddle encyclopedia articles (including the article images and facts) can be freely used under Attribution-ShareAlike license, unless stated otherwise. Cite this article:
Butteville, Oregon Facts for Kids. Kiddle Encyclopedia.