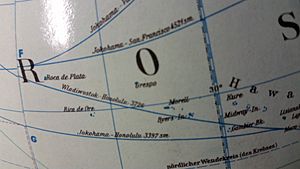 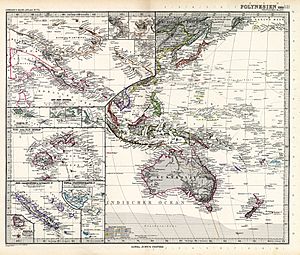 Byer or Patrocinio in Stieler's hand atlas from 1891, northwest of it Morell, each with question marks

Benjamin Morrell writes that he landed on an island he called Byers Island, on 12th July 1825. According to Morrell, this island was at a position of 28 degrees 32 minutes North, and 177 degrees 4 seconds East. He writes about this, in his book A narrative of four voyages.

This island is a phantom island, and does not exist. Just before, he visited Pearl and Hermes Reef, and gives exact positions for the the reef. It can therefore be excluded, that he landed on Kure, and gave a wrong position for it.

Byers is the name of the owner of the ship, and one of Morrell's employers.This is another hint that Morrell may be the source of the hoax. According to Burton R. Pollin, Morrells ghostwriter was the magazine editor and playwright Samuel Woodworth.

So even though Morrell may not be the source of this and other false items in his work, he certainly knew about them. He knew about the "rectified" content of his book.

Morrell sacrificed his scientific reputation in order to be able to increase the sales of his book.

Despite this, globes of 1960s still show the islands, along four other phantom islands, northwest of Kure.

All content from Kiddle encyclopedia articles (including the article images and facts) can be freely used under Attribution-ShareAlike license, unless stated otherwise. Cite this article:
Byers island Facts for Kids. Kiddle Encyclopedia.