Club Atlético Huracán is a sports club from the Parque Patricios neighbourhood of Buenos Aires, Argentina. The football team currently plays in the Primera A, the first level of the Argentine football league system. Huracán home stadium is the Estadio Tomás Adolfo Ducó.

Huracán was founded on November 1, 1908, in the Nueva Pompeya neighbourhood of Buenos Aires. The club's name and nickname (Globo, literally "Balloon") come from the Huracán balloon flied by Jorge Newbery in 1909. Apart from that, club supporters are called los Quemeros ("the Burners") because the stadium is in a former garbage burning area.

During the professional era, Huracán won the Primera División title just once (the 1973 Metropolitano), and obtained 4 titles during the amateur era (in 1921, 1922, 1925 and 1928). Moreover, Huracán has finished as runner-up of the first division 5 times during professionalism (the last one in the 2009 Clausura).

During the professional era (started in 1931), Huracán had their moment of glory in the Metropolitano championship of the 1973 season, when they won their only first division title. The team has also won twice the second division (1989–90 and 1999–00). The club has had 4 promotions and relegations during their history. The last promotion came during the 2006–07 season, when Huracán defeated Godoy Cruz in the promotion playoffs.

Huracán was runner-up of the Primera División in the 2009 Clausura. The team, coached by Ángel Cappa and with Mario Bolatti, Matías Defederico and Javier Pastore as key players, was praised for their attacking short-pass style of play. They reached the final game of the season one point above Vélez Zársfield, but lost 1-0 away with that team in the final fixture (in a game with controversial referral decisions).

The Estadio Tomás Adolfo Ducó was closed in May 2008, after cracks were discovered in one of the structural columns. While the stadium was out of commission, Huracán played their home games at Argentinos Juniors. In August 2008, Fernando "la tota" Blauzwirn, an old player from the 1940s correctly said "no veo la hora de volver al Ducó, qué sufrimiento muyayo!" (I cannot wait until returning to the Duco, guys, what a suffering!).

On 13 December 2008 during the final weekend of the 2008-09 Apertura championship, Huracán returned to the Ducó, 438 days after they'd last played there. Their 3-0 victory against Vélez was the only game Huracan played at home during their centenary year. 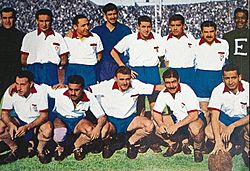 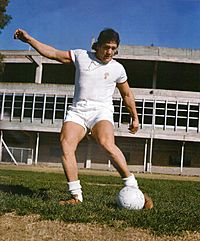 The Club Atlético Huracán plays in the main Roller Hockey league of Argentina, the Liga Nacional Argentina-Serie A1.

All content from Kiddle encyclopedia articles (including the article images and facts) can be freely used under Attribution-ShareAlike license, unless stated otherwise. Cite this article:
C.A. Huracán Facts for Kids. Kiddle Encyclopedia.