CFS Carp was decommissioned in 1994, and in 1998 it was reopened as the Diefenbunker, Canada's Cold War Museum and designated a National Historic Site of Canada. It is open year-round for tours.

In 1958, at the height of the Cold War and the infancy of the intercontinental ballistic missile (ICBM) threat, Prime Minister John Diefenbaker authorized the creation of close to 50 Emergency Government Headquarters (nicknamed "Diefenbunkers" by opposition parties) across Canada. These shelters were part of what came to be known as the Continuity of Government plan, which was meant to protect various members of government in the event of a nuclear attack.

The Carp shelter would be the largest of such facilities (over 9,300 m2 (100,000 sq ft)) and the only one in the immediate Ottawa area. The underground 4-storey bunker required 32,000 tonnes of concrete and 5,000 tonnes of steel. The structure was capable of withstanding a nuclear blast up to 5 megatons from 1.8 km (1.1 mi) away. It had massive blast doors at the surface, as well as extensive air filters to prevent radiation infiltration. Although supposedly effective against surface nuclear detonations, the facility was later found to be vulnerable to conventional Bunker buster bombs developed after its construction, as these bombs had time delay fuses that would detonate after they had penetrated deeply enough underground. 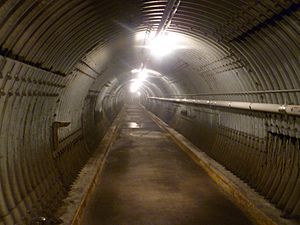 The blast tunnel entrance. The doors to the actual bunker are perpendicular to this tunnel which reduces the effects of a nuclear shock wave.

Underground storage was built for food, fuel, fresh water, and other supplies. The bunker was built to accommodate 565 people for up to one month without receiving additional supplies from the outside. It included an emergency broadcast studio for the Canadian Broadcasting Corporation and a vault on the lowest level to hold the gold reserves of the Bank of Canada.

These facilities were administered by the Royal Canadian Corps of Signals (later the Communications and Electronics Branch). A decentralized transmitter site, the Richardson Detachment, with numerous transmitter antenna was located further to the west near Perth Ontario that was supported from a 2-storey underground facility of similar construction to the Carp facility but much smaller. Two radio receiving facilities, the CFS Carp Almonte Detachment and CFS Carp Dunrobin Detachment, with a complete receiving antenna arrays were built in the region but all buildings were above ground. 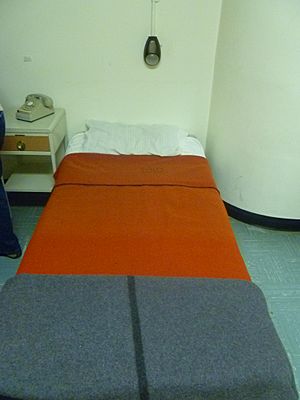 A re-creation of the very limited quarters provided for the Prime Minister. Military restrictions prohibited the Prime Minister from being accompanied by his wife and for this reason John Diefenbaker is rumoured to have refused to ever use the facility. 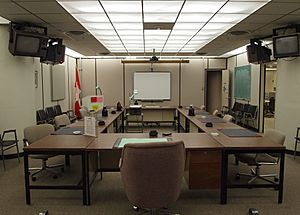 The main conference room inside the Diefenbunker to provide continuity of Canada's government activities that were legal and constitutional in case of a nuclear attack.

CFS Carp was decommissioned in 1994 following the reduction in the ICBM threat.

Many areas of the bunker, including the PM's Suite, the Emergency Government Situation Centre, the CBC Emergency Broadcasting Studio, the Military Federal Warning Centre, the External Affairs Ministerial Office, the Public Works Minister's Office and the Bank of Canada Vault, are being restored to their operational condition. The rest of the 358 rooms have been converted to exhibits of the Cold War era.

Growth of the Museum

In 1999, the museum's second year of operation, a curator was hired along with some students. The museum's visitation doubled to 10,000 people that year.

The museum continued to grow into the 2000s. Close to 15,000 visitors passed through the Diefenbunker in 2000. Additional part-time staff was hired throughout the year to keep up with museum maintenance and upkeep. As of 2008, the Diefenbunker averages approximately 25,000 visitors each year. Four full-time staff, nine part-time staff and numerous volunteers work to keep the museum running smoothly. In 2012, the museum had 45,280 visitors. This was one of the highest increases in attendance other than the opening year of the Bunker. In 2017, Canada's sesquicentennial, the Diefenbunker welcomed 88,000 visitors through its blast doors. It continues to be one of the best tourist attractions in Ottawa.

The mandate of Diefenbunker, Canada's Cold War museum is "to increase throughout Canada and the world, interest in and a critical understanding of the Cold War, by preserving the Diefenbunker as a national historic site, and operating a Cold War Museum.

The Diefenbunker houses a collection of Cold War artefacts, an archive and a library, all of which are made available to researchers upon request, and to the general public through the exhibitions.

The Diefenbunker: Canada's Cold War museum is a not-for-profit, charitable museum. It is funded privately; the main source of revenue for the museum comes from admission sales (approximately 75% of total revenue). The Diefenbunker actively applies for private, municipal, provincial and federal grants. The museum also relies on the generous support of the community through donations and sponsorship.

The Diefenbunker offers additional services on top of public tours. The museum has space available to rent both for events and storage. The decommissioned bunker has been used as a movie set on several occasions, including for The Sum of All Fears and Rulers of Darkness.

All content from Kiddle encyclopedia articles (including the article images and facts) can be freely used under Attribution-ShareAlike license, unless stated otherwise. Cite this article:
CFS Carp Facts for Kids. Kiddle Encyclopedia.