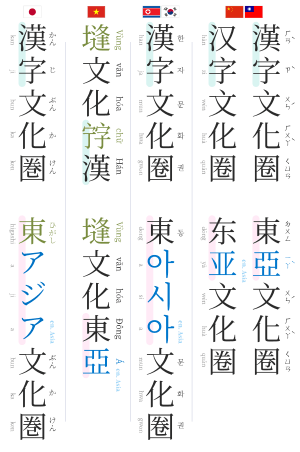 In internationalization, CJK is a collective term for the Chinese, Japanese, and Korean languages, all of which include Chinese characters and derivatives (collectively, CJK characters) in their writing systems, sometimes paired with other scripts. Occasionally, Vietnamese is included, making the abbreviation CJKV, since Vietnamese historically used Chinese characters as well. Collectively, the CJKV characters often include hànzì in Chinese, kanji, kana in Japanese, hanja, hangul in Korean, and hán tự or chữ nôm in Vietnamese.

All content from Kiddle encyclopedia articles (including the article images and facts) can be freely used under Attribution-ShareAlike license, unless stated otherwise. Cite this article:
CJK characters Facts for Kids. Kiddle Encyclopedia.