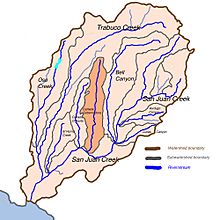 Historically, the Cañada Gobernadora valley was inhabited by the Acjachemen Native Americans who had two villages on the creek, one of which was at the confluence with San Juan Creek. This latter village became a proposed site for Mission San Juan Capistrano before it was built in the city of the same name. The name of the creek means "Canyon of the Governor's Wife" in Spanish. A less commonly used name refers to greasewood, which was once abundant in the Cañada Gobernadora watershed. The upper watershed of the creek is now mostly occupied by suburban residential communities, and the middle and lower portions are given primarily to agriculture.

All content from Kiddle encyclopedia articles (including the article images and facts) can be freely used under Attribution-ShareAlike license, unless stated otherwise. Cite this article:
Cañada Gobernadora Facts for Kids. Kiddle Encyclopedia.