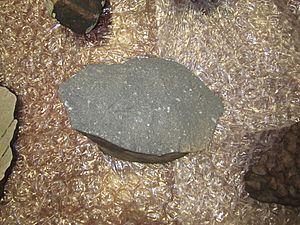 CAIs consist of minerals that are among the first solids condensed from the cooling protoplanetary disk. They are thought to have formed as fine-grained condensates from a high temperature gas that existed in the protoplanetary disk at early stages of Solar System formations. Some of them were probably remelted later resulting in distinct coarser textures.

Using isotopic dating of a CAI from NWA 2364, an age of 4568.22 ± 0.17 million years has been calculated, which can be interpreted as the beginning of the formation of the planetary system. Radiometric dating with chronometers shows that the CAIs formed up to 3 million years before the chondrules appeared, although some chondrules may have formed simultaneously with some CAIs.

All content from Kiddle encyclopedia articles (including the article images and facts) can be freely used under Attribution-ShareAlike license, unless stated otherwise. Cite this article:
Ca-Al-rich inclusions Facts for Kids. Kiddle Encyclopedia.