Cadbury Roses are a selection of machine wrapped chocolates made by Cadbury. Introduced in 1938, they are named after the English packaging equipment company "Rose Brothers" (later Rose Forgrove), based in Gainsborough, Lincolnshire, that manufactured and supplied the machines that wrapped the chocolates, although in 2016 the US owners of the company made a controversial decision to wrap the chocolates in identical sized "flow wraps".

By 2020, an alternative origin of the name was given in a text panel printed on the side of tubs of Roses. It says they were named after the favourite flowers of Dorothy Cadbury - a director of the company and renowned botanist - which grew in the gardens of the original factory at Bournville.

Upon launch in Ireland they were called ‘Cadbury‘s Irish Rose‘; however, this name was discontinued from the 1970s onwards.

They are an extremely common gift on Mothering Sunday and sell well throughout the Christmas period. They are available in plastic tubs or boxes and in the United Kingdom, Isle of Man and Ireland currently contain 9 different varieties of chocolate. A YouGov poll saw Cadbury Roses ranked the 6th most famous confectionery in the UK. 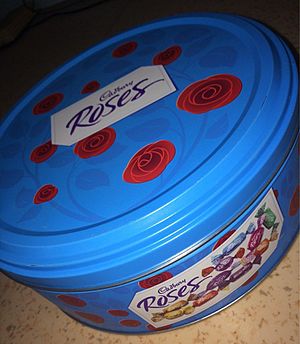 In Australia the varieties have changed and are currently (September 2018):

All content from Kiddle encyclopedia articles (including the article images and facts) can be freely used under Attribution-ShareAlike license, unless stated otherwise. Cite this article:
Cadbury Roses Facts for Kids. Kiddle Encyclopedia.