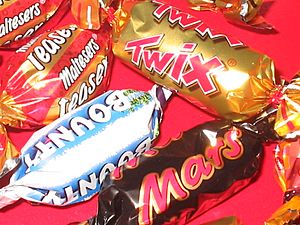 Some of the Celebrations lineup

Celebrations is a miniature chocolate bar collection made by Mars, Incorporated, launched in 1997. It comprises miniature versions of full size Mars brands. Celebrations have the tagline "Share the joy", and were one of the first mixed box of chocolates in the United Kingdom to bring together confectionery which had been already released in one box or tin instead of introducing new, especially-created confectionery made exclusively for the UK market, by a major producer. Celebrations boxes are now sold in multiple countries which tend to have the same brands as the UK (Galaxy goes under Dove in most countries), but do differ in some circumstances. Twix does not come in Australian celebrations for example.

The selection sold in the United Kingdom also previously had:

In some countries the Milky Way has been replaced or under limited edition swapped for Milky Way Crispy Rolls around 2017.

All content from Kiddle encyclopedia articles (including the article images and facts) can be freely used under Attribution-ShareAlike license, unless stated otherwise. Cite this article:
Celebrations (confectionery) Facts for Kids. Kiddle Encyclopedia.