Maltesers are a British confectionery product manufactured by Mars, Incorporated. First sold in the UK in 1937, they were originally aimed at women. They have since been sold in Europe, Australia, New Zealand, Canada, and, since 2017, the US. The slogan is "The lighter way to enjoy chocolate".

Maltesers consist of a spheroid malted milk centre surrounded by milk chocolate. Maltesers are sold in a variety of packaging, including plastic bags (ranging in size from small 'fun-size' upwards), larger cardboard boxes and tubes, and plastic buckets (ranging in size from medium to very large). They also have medium-sized "teasers" in Celebrations boxes. Maltesers are also one of the types of chocolate included in Mars's Revels assortment.

A YouGov poll conducted between July and October 2020 saw them ranked the most popular confectionery in the UK.

Maltesers were created by the American Forrest Mars Sr. in England in 1936, and first sold in 1937. They were originally described as "energy balls" and aimed at slimming women.

The current Maltesers' slogan is "The lighter way to enjoy chocolate". Earlier slogans have included: "The chocolates with the less fattening centre", "No ordinary chocolate" and "Nothing pleases like Maltesers". In the 1930s, advertisements claimed that the Maltesers malted milk centre is one-seventh as fattening as ordinary chocolate centres; this led marketers to claim it was beneficial for weight loss.

In Australia, Mars signed a production deal with MacRobertson's in 1954, but then switched to Cadbury in 1963.

In 2011, the product gained Fairtrade accreditation in the UK and Ireland by sourcing all their cocoa and sugar under Fairtrade Terms. In 2016, Maltesers’ commercials in the UK began featuring disabled actors (including The Inbetweeners actress Storme Toolis) which have been highly successful for the brand. Celebrating universally awkward situations, the adverts were inspired by real-life stories from disabled people. 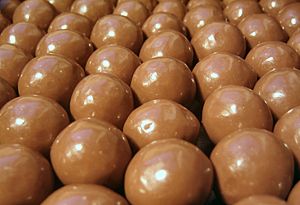 All content from Kiddle encyclopedia articles (including the article images and facts) can be freely used under Attribution-ShareAlike license, unless stated otherwise. Cite this article:
Maltesers Facts for Kids. Kiddle Encyclopedia.