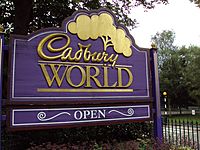 Cadbury World is a visitor attraction, featuring a self-guided exhibition tour, created and run by the Cadbury chocolate company.

Cadbury World was opened on 14 August 1990 by Morgan Anderson on Cadbury's Bournville manufacturing site, and has expanded and developed its content through 'continuous improvement'.

Cadbury World has gone on to become one of Birmingham's largest leisure attractions - welcoming over 500,000 visitors each year, and delivering a respected education programme (linking back directly to the educational advancements and interests of the company's original founding fathers).

Whilst not a factory tour, Cadbury World offers its visitors the opportunity to explore and discover chocolate's history, and to learn about the origins and story of the Cadbury business, which is part of Mondelez, the world's second largest confectionery manufacturer.

These zones also include "The Bournville Experience" (Opened in 2007 replacing the Cadbury Collection Museum), which explains the background to the development of the site on which it is located and "4D Chocolate Adventure", constructed in 2014 and replacing "Essence" which in turn replaced "Cadburyland" before it, and which incorporates a 3D cinema.

In July 2003 another Cadbury World was opened in Dunedin, New Zealand. It is located in the Cadbury Factory site at 280 Cumberland St, close to the city centre near the Octagon. This is one of the largest factories in Dunedin that also offers tours and has become very popular with tourists visiting Dunedin. In May 2009 renovations were carried out inside the Cadbury World Visitors' Centre. The attractions which had existed since the opening were taken out, and new areas were added, including an Aztec-themed room and Old England room. Unlike the Cadbury World in Birmingham, it offers guided tours around the manufacturing area of the factory.

The Dunedin Cadbury World offers three different tours: the Factory Tour, the Shortened Tour, and the Centre Tour. The Factory Tour takes approximately 75 minutes, and incorporates a ten-minute self-guided tour around the Visitors' Centre before a fully guided tour through several areas of the operational factory. Chocolate samples—including fresh liquid chocolate—are given along the way, and the tour culminates in a five-story decommissioned crumb storage silo, inside of which currently is the world's largest chocolate waterfall. The Factory Tour only operates on weekdays; the factory does not work on the weekends. As a result, Shortened Tours are offered on Saturdays and Sundays. These tours do not venture into the factory; instead a DVD is played in which shows weekday operation. The final tour option, the Centre Tour, is purely self-guided around the Visitors' Centre. All tours end up in the Cadbury World retail outlet, which has chocolate at discounted prices compared to supermarkets in Dunedin, and unique, novelty souvenirs.

All content from Kiddle encyclopedia articles (including the article images and facts) can be freely used under Attribution-ShareAlike license, unless stated otherwise. Cite this article:
Cadbury World Facts for Kids. Kiddle Encyclopedia.