The Cadell Fault is a north-south trending intra-plate geological fault in the Riverina area of New South Wales and Victoria within Australia. It straddles the Murray River and in quite recent prehistoric times has impacted its course, as well as the courses of the Edward River, Wakool River, Goulburn River and Campaspe River. The Cadell Fault is notable due to this impact and has been described as one of the most significant examples of seismic activity changing the course of rivers. The fault is visible as a continuous earthen ridge along the Cobb Highway between Deniliquin and Echuca, and extending further south into Victoria. The fault is likely named after Francis Cadell, an early pioneer of the Murray River and river trader. 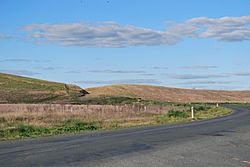 The Australian Continental Plate is generally considered to be one tectonic plate, and is classified as a Stable Continental Region. Within the plate, however, there are a number of fault lines. These lines are relatively stable compared to the external plate boundaries, but do have the potential to generate significant earthquakes. The Cadell fault is an example of this.

The uplifted Cadell fault forms a bifurcated scarp, the northern part of which extends for 55 kilometres from Deniliquin to Echuca with a height of 12–15 metres, and the southern part which extends for 13 kilometres south of Echuca with a height of about 3–4 metres. The split between the two elements has been formed by the erosion caused by historic Lake Kanyapella (refer to the Goulburn section below). The fault deforms a 200- to 250-metre-thick section of sedimentary rock, which overlies a granitic base rock. To the west, the Cadell Tilt Block was formed subsequent to the uplift

Rise and impact on river courses 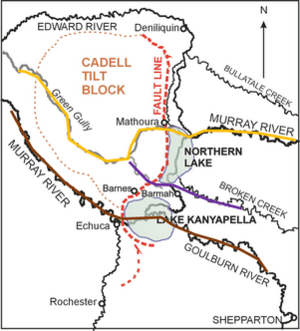 The Cadell fault showing the possible former courses of the Murray (yellow), Goulburn (purple) and Campaspe (brown) rivers. The fault itself is the red dashed line

The uplift of the Cadell fault significantly impacted the course of the Murray River. Prior to the uplift, the Murray travelled from its current position just to the south of Mathoura, through a channel now known as Green Gully. This then traversed the plains west of Mathoura to join the course of the current Murray further west.

Green Gully appears to have been abandoned due to the uplift approximately 45,000 years ago. Uplift of the fault line is thought to have commenced up to 20,000 years before this (i.e. 65,000 years ago) but at 45,000 years ago it reached a sufficient level to disrupt the flow of the river. Prior to this, the river had been able to maintain its course within the Green Gully, albeit with significant modification to the channel. The uplift effectively dammed the river and formed a large expanse of water, continuously fed by glacial and snow melt further up in the Snowy Mountains. After a period, the flows found their present course into the Edward River and began to make its way westward via the Deniliquin region. An earlier stream formed by this northward flow is the Gulpa Creek. During this period, the main flow of the Murray may have also followed the course of the current Bullatale Creek The Northern lake continued to exist at this time, with evidence of silt jetties being formed towards present day Barmah eventually draining to become a series of wetlands and swamps. Present day Moira Lake and Barmah Lake are remnants of the Northern Lake.

Recent research indicates that the current course of the Murray River through the Narrows (also known as the Barmah Choke) may have originated in recent history, in fact as recently as approximately 550 years ago (approximately 1450 CE). Indeed, local Aboriginal legend is that the Aboriginal population of the region at the time was instrumental in the formation of the current path of the Murray. Folklore has it that the local Aborigines carved a channel through the sandbank holding the waters of the Northern Lake back, which then allowed the water to flow into the Goulburn River and form the current course of the Murray. The Narrows were noted by early squatters to the area to be somewhat unusual given their straight sidedness, compared to the more sloping bank formation of mature rivers

The damming of the Murray in this way directly led to the creation of the Barmah Red Gum Forests, protected by the Barmah National Park in Victoria and Murray Valley National Park in NSW. This damming caused the creation of the river alluvial fan (through aggradation) on which the red gum forests established, and the ongoing flooding and draining of the area has led to the arboreal ecosystem present today.

The Edward River owes a significant part of its origin to the rise of the Cadell fault. Whilst not studied in as much detail as the course of the Murray, water flowing out of the Northern Lake may have found a previous tributary of the Murray and made its course across to the present day confluence with the Wakool River and eventually the Murray at Kyalite.

Today, the majority of the flow from the Murray river flows northward through the Edward, with a lower amount travelling southward into the Murray itself.

Similar to the Murray, the Goulburn River formerly followed a path to the north of its current path, flowing through the Broken Creek and meeting with the former Murray (now Green Gully) somewhere southwest of Mathoura where it continued westward.

With the uplift of the Cadell, a large lake was also formed south of the Northern Lake, that was the predecessor of present-day Lake Kanyapella, the remnant of the larger prehistoric lake. Wind-blown, or Aeolian, movement of surface soils created the Barmah Sandhills on the northeastern edge of this lake. Over time, water flowed from this lake into the Campaspe River, and the Goulburn River changed its course to follow this path. Erosive water flows eventually drained the prehistoric Lake Kanyapella along the course of the current Murray River.

The path of the Campaspe River was less impacted by the Cadell fault, however the routing of both the Goulburn and the Murray down through the course of the ancient Campaspe (instead of both rivers continuing westwards towards Kyalite had the effect of making the Campaspe upstream of Echuca a tributary of the new Murray and making its reaches from Kaarimba to Kanyapella a part of the Goulburn River.

As the location of a significant tectonic event, and due to the population and production importance of the region to Australia, Geoscience Australia has studied the likelihood of further earthquake activity in the region. Based on their modelling of the maximum credible earthquake (of Mw 7.2), the damage incurred would be catastrophic, with over 1,000 square kilometres of land suffering 50% loss of structures. A potentially more frequent earthquake (of Mw 6.8) would do less damage in itself, but due to the increased frequency of occurrence, may be more of a risk. These are estimates only on the information presently at hand, and Geoscience Australia has not specified its confidence in its estimates.

Future movement of the Cadell fault may also impact river courses, as it has done in the past.

All content from Kiddle encyclopedia articles (including the article images and facts) can be freely used under Attribution-ShareAlike license, unless stated otherwise. Cite this article:
Cadell Fault Facts for Kids. Kiddle Encyclopedia.