Caerhays Castle or Carhayes Castle (translation of caerhays into English: "enclosed castle") is a semi-castellated manor house 0.5 mi (0.80 km) south of the village centre, St Michael Caerhays, Cornwall, England, UK. It overlooks Porthluney Cove on the English Channel. The garden hosts the largest collection of magnolias in the United Kingdom and contains one of four National Magnolia Collections under the auspices of the National Council for the Conservation of Plants and Gardens.

In the Early Middle Ages, the manor belonged to the Arundell family. The earliest record of the name is Karihaes in 1259, and is recorded as Carihays in 1379, but its original meaning is obscure. In about 1379, it passed by marriage to the Trevanion family after the marriage of Robert Trevanion to Johanna Arundell, daughter and heiress of Rudolph Arundell of Caerhays. John Trevanion inherited the estate in 1703 after which he improved the manor house existing on the site and developed gardens.

With the death of William Trevanion in 1767, the estate passed to his sister's son, John Bettesworth. John's son, John Bettesworth-Trevanion, built the present castle on a site close to the former manor house between 1807 and 1810; his architect was the Anglo-Welsh John Nash. The castle was built close to the site of the original ancient home that had itself undergone expansion during the reign of King Henry VIII. 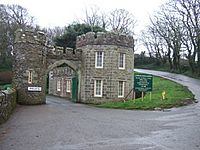 The exterior, bearing the appearance of a Norman castle, was built of rough stone quarried from the immediate neighbourhood. The front entrance, 160 ft (49 m) in length, has a southern exposure and is elevated on an embattled terrace. The principal rooms toward the south and east, joined by a large gallery room. Painted glass adorns the windows of the dining room, staircase, and entrance hall.

Parts of the original manor remain, including the ancient chapel as well as an old walkway to the sea which retains the name of the Watchhouse Walk. 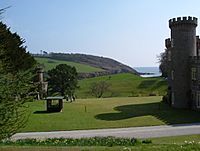 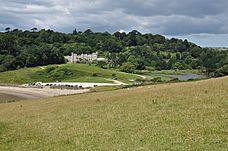 The sweeping lawns to the castle

The castle garden covers almost 120 acres (0.49 km2), traversed by four named routes (Red Route, Blue Route, Yellow Route, and the Green Route), and navigated by trails, grassy paths, and steps. The garden is home to 600 varieties of plants, including trees and shrubs, such as azaleas and camellias. By 1917, it had over 250 types of rhododendron. The garden hosts the largest collection of magnolias in the United Kingdom.

All content from Kiddle encyclopedia articles (including the article images and facts) can be freely used under Attribution-ShareAlike license, unless stated otherwise. Cite this article:
Caerhays Castle Facts for Kids. Kiddle Encyclopedia.