Caladenia ferruginea, commonly known as the rusty spider orchid, is a species of orchid endemic to the south-west of Western Australia. It has a single, hairy leaf and up to four rust-coloured flowers with a white, red-tipped labellum. 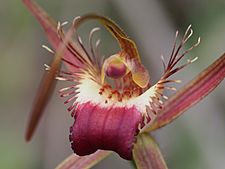 Caladenia ferruginea was first described by William Nicholls in 1947 and the description was published in The Victorian Naturalist. The specific epithet (ferruginea) is a Latin word meaning "rust-coloured" referring to the colour of the flowers of this orchid.

Rusty spider orchid is found between Perth and Albany in the Jarrah Forest, Swan Coastal Plain and Warren biogeographic regions where grows in a variety of habitats ranging from well-drained soil in woodlands to swamps which are flooded in winter.

Caladenia ferruginea is classified as "not threatened" by the Western Australian Government Department of Parks and Wildlife.

All content from Kiddle encyclopedia articles (including the article images and facts) can be freely used under Attribution-ShareAlike license, unless stated otherwise. Cite this article:
Caladenia ferruginea Facts for Kids. Kiddle Encyclopedia.