Caladenia incensum, commonly known as the glistening spider orchid is a species of orchid endemic to the south-west of Western Australia. It has a single, hairy leaf and three glistening white flowers which have a red-striped labellum. 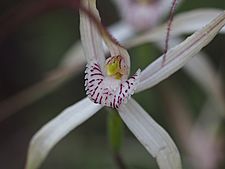 The glistening spider orchid was first formally described in 2001 by Stephen Hopper and Andrew Phillip Brown from a specimen collected in the Chiddarcooping Hill Nature Reserve north of Westonia and given the name Caladenia incensa. The description was published in Nuytsia. In order that the genus and species names were of the same gender, the name was changed to Caladenia incensum. The specific epithet (incensum) is a Latin word meaning "resinous material that yields a fragrant odour or smoke when burned" referring to the sharp, burning metal odour of this orchid.

The World Checklist of Selected Plant Families gives the name C. incensa but the Western Australian Herbarium lists this name as a spelling mistake.

The glistening spider orchid occurs between Hyden and Nerren Nerren Station, north of the Murchison River in the Avon Wheatbelt, Coolgardie, Geraldton Sandplains, Mallee, Murchison and Yalgoo biogeographic regions where it grows under shrubs on and near granite outcrops.

Caladenia incensum is classified as "not threatened" by the Western Australian Government Department of Parks and Wildlife.

All content from Kiddle encyclopedia articles (including the article images and facts) can be freely used under Attribution-ShareAlike license, unless stated otherwise. Cite this article:
Caladenia incensum Facts for Kids. Kiddle Encyclopedia.