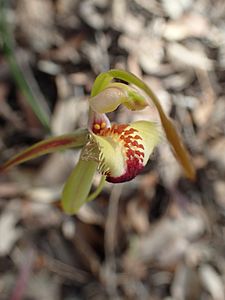 This orchid was first described in 1930 by Edith Coleman who gave it the name Caladenia dilatata var. rhomboidiformis and published the description in The Victorian Naturalist. In 1971, Alex George recognised it as Caladenia longiclavata var. rhomboidiformis and in 1989 Mark Clements and Stephen Hopper raised it to species status. The specific epithet (rhomboidiformis) is derived from the Ancient Greek word ῥόμβος rhombos meaning "rhombus", the suffix oid meaning "likeness" and the Latin word forma meaning "shape" or "figure" referring to the diamond-shaped labellum of this orchid.

The diamond spider orchid is found between Busselton and Augusta in the Jarrah Forest and Warren biogeographic regions where it grows in a variety of habitats but often in jarrah forest, or Banksia or sheoak woodland.

Caladenia rhomboidiformis is classified as "not threatened" by the Western Australian Government Department of Parks and Wildlife.

All content from Kiddle encyclopedia articles (including the article images and facts) can be freely used under Attribution-ShareAlike license, unless stated otherwise. Cite this article:
Caladenia rhomboidiformis Facts for Kids. Kiddle Encyclopedia.