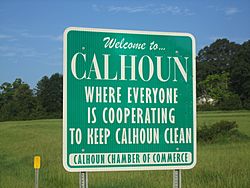 Calhoun is located in a rural area with a landscape mixture of hills and woodlands on the former transcontinental route U.S. 80 near Interstate 20 approximately 10 miles west of West Monroe. It has experienced a large growth in population recently, due to many retail, restaurant, and entertainment venues nearby, as well as 3 local universities, but it also attracts young families raising children due to 4 public schools located in the community that all consistently place in the top percentile in achievement.

All content from Kiddle encyclopedia articles (including the article images and facts) can be freely used under Attribution-ShareAlike license, unless stated otherwise. Cite this article:
Calhoun, Louisiana Facts for Kids. Kiddle Encyclopedia.