The California toad is less blotched (reduced dorsal melanin) than the boreal toad. It has a wider head, larger eyes, smaller feet, and a weaker development of the margins along the dorsal stripe. The largest western toad larvae at 56 mm is also of the California toad. The toad has a wide range of dorsal coloration, from light gray to green to dull black; most however are brownish gray. The California toad, as a western toad, walks rather than hops The adult size range is two to five inches. 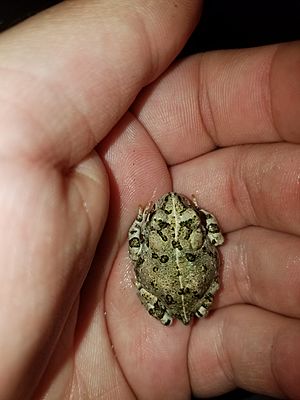 The California toad occurs from all of Northern California and down south into Baja California. There are scattered populations in isolated desert areas, such as in the Mojave Desert, but they generally do not occur in the desert areas from Death Valley southward. The habitats for the California toad range from woodland, grassland, and meadows in forest areas to backyards and parks in the suburbs. It breeds in lakes, creeks, ponds, reservoirs, slowly flowing streams, and canals.

The California toad breeds from January to July, with later spawning occurring at higher elevations. Many populations are aggregation breeders that come to suitable marsh or pond spawning sites in large numbers. Here males recognize females through random amplexus. Eggs number over 16,000 per female and are laid in strings in shallow water.

All content from Kiddle encyclopedia articles (including the article images and facts) can be freely used under Attribution-ShareAlike license, unless stated otherwise. Cite this article:
California toad Facts for Kids. Kiddle Encyclopedia.