Caltha leptosepala, the white marsh marigold, twinflowered marsh marigold, or broadleaved marsh marigold, is a species of flowering plant in the buttercup family. It is native to western North America from Alaska to New Mexico, where it grows in wet mountain habitats in alpine and subalpine regions. There are two general wild types of this species, one native to the interior and one that grows along the Pacific coast and coastal mountains, but these are not always treated separately. 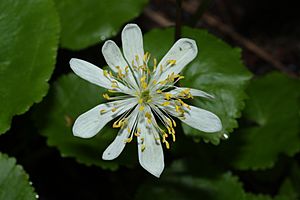 This is a perennial herb growing a mostly naked stem with leaves located basally. The leaves are up to 13 or 15 centimeters long and may have smooth, wrinkled, or toothed edges. The inflorescence bears one or more flowers. Each flower is 1 to 4 centimeters wide and lacks petals, having instead petallike sepals which are usually white or sometimes yellow. In the center are many long, flat stamens and fewer pistils.

Caltha leptosepala used to be assigned to the Populago (now Caltha) section with all other Northern Hemisphere species. Genetic analysis however suggests that C. leptosepala is the sister of all Southern Hemisphere species and should be moved into the Psychrophila section. Caltha leptosepala itself is a complex species that has two distinct subspecies in the southwest and southeast of its range, but in the north of its range the distinguishing sets of characters can be found in any combination, and such plants cannot be assigned to either subspecies.

The leaves are eaten by elk, although they contain toxic alkaloids.

The leaves and flower buds were eaten by some of the indigenous people of Alaska.

All content from Kiddle encyclopedia articles (including the article images and facts) can be freely used under Attribution-ShareAlike license, unless stated otherwise. Cite this article:
Caltha leptosepala Facts for Kids. Kiddle Encyclopedia.