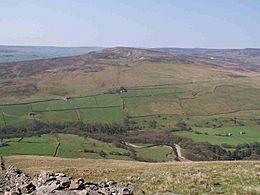 Calver Hill seen from the east, from Fremington Edge on the opposite side of lower Arkengarthdale. The Arkle Beck can be seen in the valley bottom as it flows down towards Reeth to join the River Swale 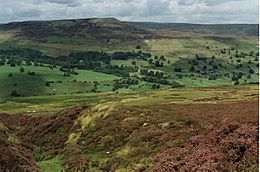 Calver seen from the south, across Swaledale, with Healaugh to the right of the picture and Fremington Edge beyond

Calver Hill is a fell in the Yorkshire Dales National Park in North Yorkshire, England. It is composed of limestone and is situated at grid reference , near where the valleys of Swaledale and Arkengarthdale meet, the village of Reeth is located on its lower south-eastern slopes, it reaches an altitude of 487 metres (1,599 feet) and is a distinguished feature in mid Swaledale. Calver Hill is an area of grouse shooting and the fell is dotted with grouse butts. Most of the drainage from the fell goes north and easterly to join the Arkle Beck in lower Arkengarthdale which eventually joins the River Swale just south of Reeth.

Older versions of the 1:25,000 Ordnance Survey map show a trig point at the summit of Calver Hill but all there is now is a pile of rubble and mining spoil to form a summit cairn. The fell is littered with signs of Calver Hill’s industrial past; there is a large disused quarry 500 metres (1,600 ft) north-west of the summit cairn, there are also disused tips, pits and shafts from former lead mines. Lead mining reached its heyday in the 19th century in this area and they were some of the most productive mines in Yorkshire. Calver Hill was a Bole hill a place where the lead from the mines was smelted in an open air furnace which used the prevailing wind to increase the heat. Burnt stones and a scattering of slag show the locations of these furnaces.

Calver Hill can be climbed from Reeth or from Langthwaite and Arkle Town in Arkengarthdale. From Reeth, Skelgate Lane is taken from just to the west of the village, this climbs through farmland until the open fell is reached at a height of 300 metres (980 ft), the western ridge is then followed to the summit of the fell. From Arkengarthdale, the Arkle Town to Healaugh bridleway can be used to attain the western ridge at a height of 420 metres (1,380 ft); it is then a simple walk to reach the top.

All content from Kiddle encyclopedia articles (including the article images and facts) can be freely used under Attribution-ShareAlike license, unless stated otherwise. Cite this article:
Calver Hill Facts for Kids. Kiddle Encyclopedia.