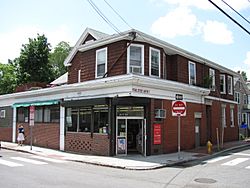 Cambridgeport is one of the neighborhoods of Cambridge, Massachusetts. It is bounded by Massachusetts Avenue, the Charles River, the Grand Junction Railroad, and River Street. The neighborhood contains predominantly residential homes, many of the triple decker style common in New England. Central Square, at the northernmost part of Cambridgeport, is an active commercial district and transportation hub, and University Park is a collection of renovated or recently constructed office and apartment buildings. The neighborhood also includes Fort Washington Park, several MIT buildings, and Magazine Beach.

The neighborhood is Area 5 of Cambridge.

In the late 1800s the Fig Newton cookie (named after nearby Newton, Massachusetts) was first manufactured in Cambridgeport at the F. A. Kennedy Steam Bakery.

Portions of the neighborhood would have been demolished as part of the Inner Belt highway project. The interstate would have followed the path of Brookline Street to the Boston University Bridge.

All content from Kiddle encyclopedia articles (including the article images and facts) can be freely used under Attribution-ShareAlike license, unless stated otherwise. Cite this article:
Cambridgeport, Cambridge Facts for Kids. Kiddle Encyclopedia.