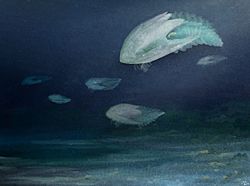 Hundreds of specimens were found in the Burgess Shale. It was a large animal (for its day): it was up to 30 cm long. It had a horseshoe-shaped carapace, and probably fed by sifting through the sediment with its round mouth lined with hooked spines.

This predator lived more than 500 million years ago. Its fossil has been discovered in Kootenay National Park in the Canadian Rockies.

Cambroraster falcatus is perhaps ancestral to insects, crabs and spiders. The fossils were discovered by palaeontologists from the Royal Ontario Museum and University of Toronto.

All content from Kiddle encyclopedia articles (including the article images and facts) can be freely used under Attribution-ShareAlike license, unless stated otherwise. Cite this article:
Cambroraster Facts for Kids. Kiddle Encyclopedia.