Cameron Lake is a lake in central Vancouver Island located 15 km east of Port Alberni, on the north side of Highway 4. It has an area of 477 hectares and an elevation of 184 metres above sea level. The lake is between Mount Arrowsmith to the south and Mount Wesley to the north. The lake was named by Captain Richards in 1860 for David Cameron, the first Chief Justice of Vancouver Island.

A popular folktale is that a train came crashing down the mountain from the Cameron Lake Train Line, this however is false.

In the summer of 2009, the B.C. Cryptozoology Club was not able to identify the source of earlier sightings of what may have been a large trout or something larger leading to speculation about some sort of sea serpent. In February 2016 researcher John Kirk and his team detected something big in the water, however, their underwater camera became detached. Kirk speculates the mysterious lake creature could be a giant sturgeon, a huge eel or a massive salamander. 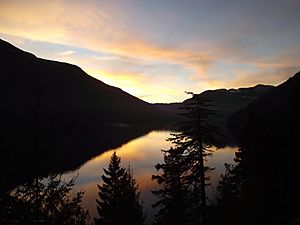 Cameron Lake, BC at dusk, viewed from the north 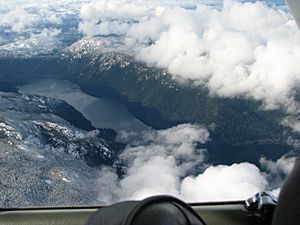 All content from Kiddle encyclopedia articles (including the article images and facts) can be freely used under Attribution-ShareAlike license, unless stated otherwise. Cite this article:
Cameron Lake (British Columbia) Facts for Kids. Kiddle Encyclopedia.