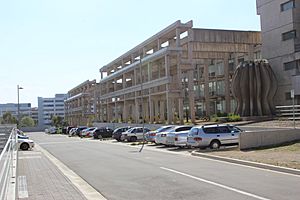 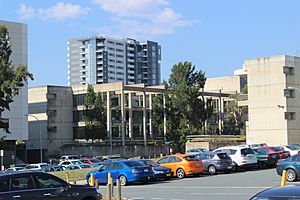 The Cameron Offices are a series of former government offices commissioned by the National Capital Development Commission and designed by John Andrews in the Brutalist structuralism style of architecture. The offices were constructed between 1970 and 1976 and partially demolished during 2007–08. They are located in the Belconnen Town Centre, in the district of Belconnen, located in Canberra, in the Australian Capital Territory, Australia.

During their thirty-year life cycle, the Cameron Offices primary occupant was the Australian Bureau of Statistics. Three wings (3, 4 and 5) and the pedestrian bridge, from the initial nine wings, remain. Wing 3 is currently occupied by the government agency responsible for superannuation administration, Commonwealth Superannuation Corporation. Wings 4 and 5 have been converted from government offices into student accommodation for the nearby University of Canberra.

The Cameron Office Complex is more than a building: it is "a varied streetscape of walks, gardens and pavilions. Its triumph lies in the interlocking unity of its concept and the diversity within it."

The Cameron Offices were the first major buildings to be built in Belconnen. They formed part of the original town plan, in which the aim was to provide a relatively compact pedestrian-oriented scheme on a north–south axis following the slope of the land from housing to the south through the office areas, transport interchange and shopping centre on to the man-made Lake Ginninderra, which was to have cultural buildings and housing along its shore.

Andrews was chosen by Sir John Overall of the National Capital Development Commission as the architect, mainly on the recommendation of Professor Gordon Stephenson. Andrews, who was a professor of architecture at the University of Toronto at the time, returned to Australia specifically to undertake the project. Andrews wished to create a truly Australian modern large-scale building suited to Australian conditions, something that he believed had not been achieved at that time. It was designed to accommodate approximately 4,000 public servants.

Built over a 2.4-hectare (6-acre) site, the complex was constructed with in insitu-concrete – much of the Mall, and precast concrete (mostly post-tensioned) – the office wings, with precasting being done on site.

The structural system chosen for the office wings was complex yet logical in that it was to provide efficient and economical use of materials, column free office spaces with clear spans of 17 metres (56 ft) in the north–south shortest direction, sun shading to the north facing office wings and a pleasing regular architectural rhythm to the overall complex. The 17-metre-long (56 ft) precast concrete 'T' beams, which form the floors and roofs, overhang to the north and are picked up by edge beams which are in turn supported by individual columns staggered for each floor. The southern ends of the 'T' beams are supported by edge beams which are picked up by individual staggered hanging 'columns' from large 'gallows' beams which span across the landscaped courtyards. The gallows beams are in turn supported by large, full-height columns to the south of the hangers and the main structure of the offices on the north. Since the gallows beams are being 'pulled down' by the hangers, the load on the beam at the other end where it is supported by columns is minimal, thus providing an efficient structural system that is in tension at one end and under compression at the other. To provide column-free offices, the structural columns are located in the landscaped courtyards between each wing; themed according to different types of vegetation and ecosystems from various parts of Australia.

The design qualities of the Cameron Offices were recognised as significant at the time of their construction and won worldwide acclaim through a listing on the Union of International Architects Heritage register. The Cameron Offices are listed on the Australian Institute of Architects register of significant Twentieth Century Australian buildings.

In 1999 Cameron Offices were listed on the now defunct Register of the National Estate.

Although located close to a bus interchange, the location of the Cameron Offices was criticised for being isolated by carparks and being too distant from the central shopping centre. The Belconnen shopping precinct was, originally, to be located immediately to the North of the offices and the Level 1 "Mall" on the offices terminated abruptly with a handrail in expectation that this Mall, which was also to cross College Street to the South and connect with medium-density housing there, would subsequently be built. The Link to the South was never completed and the Belconnen Shopping precinct was subsequently "lifted" from the site to the North of the offices and buried, after extensive excavation still apparent today, into the Western side of Benjamin Way. This all but totally severed the offices from the shopping precinct and placed the office car parking between them and the shopping precinct. The nature of the voids within the wings resulted in windtunnel effects, which combined with the buildings' concrete design to make them unpleasant to walk around, particularly in the winter. And the sprawling nature of the building made it tedious and slow for the inhabitants to walk between offices and meeting rooms for discussions with colleagues. Due to these design elements, and the fact that Cameron Offices was staffed by public servants re-located from the more central government precinct in Parkes into what many saw as a back-water, the Cameron Offices were unpopular with many of the public servants who worked in the buildings.

The foregoing lists very minor issues from the view of the people that worked in the building. The design was claimed to be inherently confusing, possibly due to the site sloping in two directions though to the occupants each "wing" was distinctive because of its stand-alone colour scheme (designed by Gordon Andrews) and the landscape treatment of its courtyard (Designed by Richard Strong). To provide security many of the 250 external doors were subsequently permanently locked leading to difficulties in communicating between wings and modules. The construction was not up to the standard envisaged by the architect so that the building leaked continually. Many of the leaks arose from the use of expansive areas of concrete wall in the design and the inadequacy of membrane roof materials and design at the time. To overcome the leaks the roof gardens – a major element of the design had to be removed and replaced (at a cost approaching $6m) in the mid 1980s.

There were amusing sidelines to the construction. In Wing 9 an area of concrete was marked with an X: it was rumoured that this block anchored the whole building and if it was removed the entire nine wings would collapse. When wings 5–9 were demolished this was shown to be untrue.

In 1997 the Australian Government announced the elimination of 70,000 square metres (750,000 sq ft) of office space to stabilise and rejuvenate the commercial property market in Canberra, while removing surplus offices accommodation resulting from Commonwealth Public Service cuts. Cameron Offices was proposed for demolition. In 1998, the Department of Finance and Administration (DOFA) commissioned a conservation analysis of the building and also a separate study to investigate the partial demolition options. In 1998 DOFA issued a Call for Detailed Proposals to sell the property at market value, reduce vacant commercial office space and consider other objectives. The conservation analysis of the complex was completed in 1998 and the complex was entered in the Register of the National Estate in 1999. Several studies during 1999 examined possible refurbishment and reuse feasibility. DOFA advised the Australian Heritage Commission that there was no feasible and prudent alternative to partial demolition of Cameron Offices but that part of the building would be retained to allow the heritage values of the place to be interpreted.

In 2000, the building was sold to Bovis Lend Lease. Work on the demolition of Cameron Offices was due to commence in May 2002 with new buildings to be completed in 2005. In 2001, Andrews and Cameron Nominees (the owners of the buildings) investigated changes in the redevelopment strategy to permit retention of most of the significant elements including all buildings other than Wings 1 and 2, and the portion of the mall extending from Wing 3 to the bus interchange. This resulted in retention of most of the original building and the retention of the Optical Galaxy sculpture in its original location. Three major areas of change were recommended; the demolition of Wings 1 and 2, the partitioning of the open plan wings for apartments or small-scale commercial premises, and changes to the courtyards to provide the main address to each apartment.

From late 2005, the offices have been progressively decommissioned and redeveloped. Two of the wings were demolished in late 2006. By early 2008, all but three of the wings had either been completely demolished (those to the north), or demolition was well under way (those to the south). Wings 3, 4 and 5 and the pedestrian bridge over Cameron Avenue have been retained, and have had some cosmetic repair work done at the street-level entrances.

On 18 January 2008, a car parked outside of the safety fence was crushed when a section of the partly demolished building fell.

In 2010, Wing 5, which had remained vacant after the demolition of the other wings, was converted into student accommodation for the nearby University of Canberra.

In 2013, ComSuper combined their offices in Wings 3 and 4, into Wing 3. Between 2013 and 2014, the recently vacated Wing 4 was also converted into student accommodation.

All content from Kiddle encyclopedia articles (including the article images and facts) can be freely used under Attribution-ShareAlike license, unless stated otherwise. Cite this article:
Cameron Offices, Belconnen Facts for Kids. Kiddle Encyclopedia.