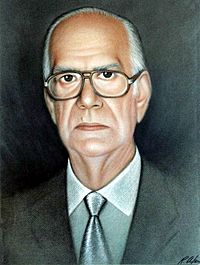 A drawing of Cela

Camilo José Cela y Trulock, 1st Marquis of Iria Flavia ( 11 May 1916 – 17 January 2002) was a Spanish novelist, short story writer and essayist. He worked with the Generation of '36 movement.

He was awarded the 1989 Nobel Prize in Literature "for a rich and intensive prose, which with restrained compassion forms a challenging vision of man's vulnerability".

All content from Kiddle encyclopedia articles (including the article images and facts) can be freely used under Attribution-ShareAlike license, unless stated otherwise. Cite this article:
Camilo José Cela Facts for Kids. Kiddle Encyclopedia.