Camp Barry was a temporary artillery military camp near Washington, D.C., during the Civil War. 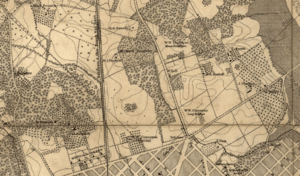 The Corcoran properties near H Street in 1861

It was located on the "Corcoran Farm located on H Street NE near the Bladingsburg Tollgate".

William W. Corcoran owned several sections of land around the Tollgate as seen on maps at the time. These included:

While the exact location is not known, all the descriptions of the camp mention the Bladingsburg tollgate as being close by. It is generally believed that it was located on "Long Meadow".

It was established as a artillery camp for the instruction of all volunteer batteries, drills and discipline preparation for service in the field as well as an artillery depot. Originally setup with Sibley tents, wooden barracks were built in the winter of 1862-1863.

The following troops barracked at the camp:

On April 3, 1865, Richmond, Virginia, is captured by the Union Army. The Secretary of War, Edwin Stanton, received a telegraph informing him of the news. The news spreads all over Washington, D.C., and Battery H of the 14th Pennsylvania Artillery started firing one hundred guns at the camp.

All content from Kiddle encyclopedia articles (including the article images and facts) can be freely used under Attribution-ShareAlike license, unless stated otherwise. Cite this article:
Camp Barry Facts for Kids. Kiddle Encyclopedia.