Camp Claiborne was a U.S. Army military camp in the 1930s continuing through World War II located in Rapides Parish in central Louisiana. The camp was under the jurisdiction of the U.S. Eighth Service Command, and included 23,000 acres (93 km²). The camp was just north of the town of present-day Forest Hill, near the intersection of U.S. Highway 165 and Louisiana Highway 112. 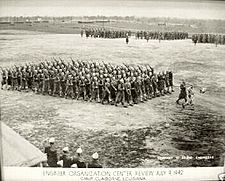 It was established June 10, 1930, as Camp Evangeline, named for the Evangeline District of the Kisatchie National Forest, where it was situated. It was later renamed for the Governor of the Territory of Orleans and first governor of the State of Louisiana, William C.C. Claiborne. In 1939, construction crews were sent to expand the camp, and it was activated in 1940.

From 1939 to 1946, over half a million men went through Camp Claiborne. The camp was mainly used for basic training and artillery practice, which included the nearby Winn District-Kisatchie Precision Bombing Range. It was also home to the Engineering Unit Training Command (EUTC). Special service forces training was also conducted there, including railroad battalion training. The 34th Infantry Division (United States) came to Claiborne for its basic training and would be the first American force sent to the European Theater of Operations (ETO).

In 1941, prior to the United States declaring war, the camp was used as part of the Louisiana Maneuvers, a 400,000-man training exercise involving two imaginary countries fighting each other. The two armies faced each other across the Red River, over 3,400 square miles (8,800 km2) of land, part of which was in East Texas. Near the end of the war, German prisoners of war (POW) were held at the camp.

Many of the men, like the ones from the 34th Infantry Division who were from Iowa, Minnesota, North Dakota, South Dakota, and Wisconsin, had never been to the South. Not only did they have to get used to basic training, they had to get used to the climate (weather and altitude) of Louisiana. 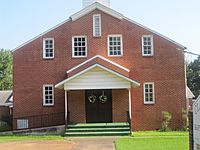 Clarence Baptist Church, off Louisiana Highway 6 moved to Clarence in 1948.

When the camp was closed in 1948, many buildings were donated or sold in the area and were moved. Some can be found in Forest Hill.

The St. Catherine Church, at the junction of US 165 with Robinson Bridge Road, uses one of the military buildings.

The Camp Claiborne chapel was relocated to Clarence in Natchitoches Parish, where it is still used for worship services by the Clarence Baptist Church. The balcony, now a storage area, was used by African American troops who were segregated in worship from white soldiers who used the pews of the lower tier.

Our Lady of Lourdes Catholic Church in Marksville Avoyelles Parish purchased an old building from Camp Claiborne after World War II for conversion as a rectory.

Some buildings were purchased by Southeastern Louisiana University.

The U.S. Forest Service (USFS) manages the property where the camp once was. Not much is left: part of a gate and a handful of scattered shells of buildings, some of which have been fenced off and sealed with sheets of metal. Many streets still exist, as well as parking lots and footings of the original buildings. The USFS also maintains Claiborne Trail, a 26-mile (42 km) trail system for hiking, walking and biking through the area.

Today the U.S. Army Corps of Engineers (USACE) is in the process of evaluating the grounds of the former camp to see how feasible it would be to remove possible unexploded ordnance.

All content from Kiddle encyclopedia articles (including the article images and facts) can be freely used under Attribution-ShareAlike license, unless stated otherwise. Cite this article:
Camp Claiborne Facts for Kids. Kiddle Encyclopedia.