Camp Fortune is a commercial alpine ski centre located in the municipality of Chelsea in the Gatineau Hills north of Gatineau, Quebec, approximately fifteen minutes from Downtown Ottawa, Ontario.

Camp Fortune is composed of three mountainsides, including the Valley, Meech, and Skyline. Pineault, Clifford and Alexander are jointly referred to as The Valley and are considered to host the easier slopes of the ski centre. Meech offers intermediate terrain, and Skyline offers advanced terrain.

During the summer, Camp Fortune operates an aerial park with zip lines and offers downhill and cross country mountain biking in addition to a disc golf course. In addition, the ski lodge is available for rent as a banquet venue.

Ryan Tower is a 228.9-metre (750 feet) tall guyed mast that was built in the 1960s, and is located at the summit of the Clifford slope. A shorter tower of 38 meters (123.5') dating from 1961 was the original antenna support structure for the radio station CFMO-FM. It was taken down on Sunday, November 4, 2012, and its functions were transferred to a new, nearby replacement tower.

Camp Fortune Ski Club operates at the hill, providing competitive and 'house' ski racing programmes for children and young adults aged 5 to 18 based on the Nancy Greene and Snowstars approaches. 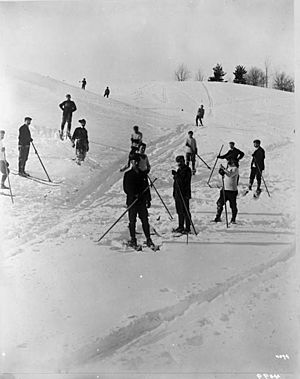 Skiing up in Gatineau, Quebec.

All content from Kiddle encyclopedia articles (including the article images and facts) can be freely used under Attribution-ShareAlike license, unless stated otherwise. Cite this article:
Camp Fortune Facts for Kids. Kiddle Encyclopedia.